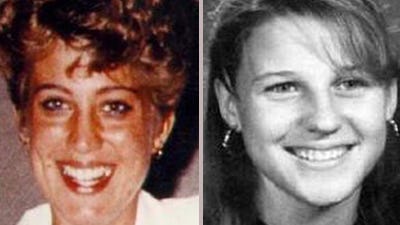 On the eve of her 22nd birthday, Angela Brosso pedaled away from her north Phoenix apartment for the last time.

It was Nov. 8, 1992. A few days earlier, Bill Clinton had defeated George H.W. Bush in the presidential election, though Arizona had backed the loser.

The Phoenix Suns were just getting started on their historic 1993 NBA finals run in the new America West Arena, now known as Footprint Center.

Brosso and her boyfriend, Joe Krakowiecki, were among the 2.2 million residents of metropolitan Phoenix. They lived at an apartment complex near Cactus Road and Interstate 17.

Originally from Pennsylvania, Brosso had studied in New Jersey and Los Angeles before a job at Phoenix communications company Syntellect Inc. brought her to the desert southwest.

Around 7 p.m. on that day in November, Brosso left the apartment and rode her bike along the Arizona Canal, as she did now and then. Krakowiecki stayed home to bake her a birthday cake.

Brosso's body was found the next day, not far from home, along a bike path near Cave Creek Park.

She had been decapitated. Her head was discovered 11 days later in the canal, where the water flows past the Metrocenter mall just north of Dunlap Avenue.

In the days and weeks after her murder, tips poured in to Phoenix police, but none led to a clear suspect. An unknown man's DNA was found at the crime scene, but with no one to match it against, the sample languished in a database.

Twenty-two years passed — the length of Brosso's life — with no answers.

New investigation techniques blending forensic science and genealogy, driven by the rise of commercial DNA and ancestry databases, produced a surname. A person from the early investigation was brought back to police attention. There was surveillance. A sting. A DNA test. An apparent match. And, finally, an arrest.

The man pleaded not guilty and on Monday, nearly 30 years after Brosso died and seven and a half years after the arrest, the accused killer will go on trial. But the charges don't stop with one death.

Ten months after Brosso was murdered, there was another victim.

When Marlene got home, her 17-year-old daughter was gone. Bernas, a student at Arcadia High School, often went out riding in the evenings, and her bicycle was missing. But hours passed with no sign of the teenager.

On the morning of Sept. 22, 1993, Melanie Bernas' body was found floating in the Arizona Canal, around 100 yards from where Brosso's head was discovered.

Despite the obvious similarities — and rampant speculation — police did not publicly connect the cases for months.

On March 16, 1994, The Arizona Republic reported police were "nearly certain" Bernas's and Brosso's lives had been cut short by the same killer.

Forensic evidence suggested one man had been in contact with both young women at the time of their deaths, police said.

But they had no suspects.

The case grew cold. The intense public fear began to ebb. And the families were forced to grapple with their immense grief and trauma in a sea of inertia.

A decade later, in 2002, the unknown suspect's DNA profile had been entered into a nationwide database.

An ethnicity and a surname

Another decade went by. And a couple more years.

By 2014, Barack Obama was president, and the Suns were in a slump. The metro Phoenix population had swelled to 4.5 million. The canal murders were far in the city's past.

But there was still that DNA profile of the unknown man, waiting for a match.

Enter Colleen Fitzpatrick, a California-based forensic genealogist with a doctorate in nuclear physics from Duke.

Fitzpatrick blends forensic science and genealogy, including the use of consumer databases like 23andMe and Ancestry, to solve cold cases or offer leads.

She has helped uncover Holocaust hoaxers, identify Sidney Leslie Goodwin, a 19-month-old who died on the Titanic in 1912, and unlock the identity of the Somerton Man, one of Australia's most enduring mysteries.

According to court documents filed by Miller's attorney, Phoenix police gave Fitzpatrick what they believed was a DNA profile of Brosso's and Bernas's killer in 2014.

It was a Y-STR profile, a type of DNA sample taken from the male Y chromosome. This DNA sequence is passed down from father to son, identical in males along the same paternal lineage.

Fitzpatrick came back with an ethnicity and a surname.

A meeting at Chili's

On Jan. 2, 2015, Bryan Patrick Miller arrived at a Chili's restaurant, not knowing his life was about to change.

He was meeting with a man who worked for a security company, to discuss potential work in surveillance, a side gig to his job at Amazon.

Or so he thought.

The security company employee was actually an undercover detective. And the Chili's servers were in on the sting.

The table was not bused as usual, and after Miller left, everything he used was seized by police and sent to a lab in the hope of obtaining his DNA.

A week and a half passed. Then word came from the lab. Miller had left a retrievable sample on a Chili's mug.

It was, the lab told cold case detectives, a match with that of the sample connected to Brosso's and Bernas's killer.

It was a stunning development in a case that had languished unsolved for 22 years. There had been no arrests made, no charges laid.

Detectives swooped in on Miller around 6 p.m. He was arrested and taken to the Phoenix Police Department's downtown headquarters for questioning.

"Hey Bryan," said the interviewing officer, introducing himself. "How are you?"

Who is Bryan Miller?

To some, Miller was known as the Zombie Hunter.

A divorced father, he drove what looked to be an old police car with faux blood stains on the side, marketing it on Facebook as available for events at comic stores, zombie walks or at film and photo shoots.

He was a keen cosplayer, a hobby involving dressing up as fictional characters, and interested in steampunk, an aesthetic subculture that draws from 19th-century steam-powered technology.

He posed for The Republic at a zombie walk in October 2014, the dramatic picture showing his face covered by a mask and round goggles with a thick wooden gun barrel pointing down the lens.

In another photo, posted on Miller's "Arizona Zombie Hunter" Facebook page, he is shown with two police officers, the picture captioned "Phoenix PD showing their support."

He had a record, a juvenile conviction for aggravated assault in 1989 over the stabbing of a woman near the Paradise Valley Mall.

He had been acquitted of another stabbing, an aggravated assault charge, in Washington state in 2002.

Miller's name had come up in the canal murders investigation, police said, but he was just one among many who could not be linked to the scene at the time. Fitzpatrick's assistance had led them to hone in on him.

Now police thought they had their man.

Around the same time they picked up Miller, officers descended on the Sunnyslope rental house by North Mountain Park where he lived with his teenage daughter.

Police rifled through the single-family home, with its cream walls and an unkempt yard, into the night. A bicycle was carried out from a shed in the backyard.

As they searched, Miller sat 10 miles away in an interview room in downtown Phoenix.

Before they started, did he want a soda? Did he need to use the restroom?

"I'm more concerned with what's going on," Miller replied. "They wouldn't tell me anything in the car."

Soon, the reason he was there was made clear.

According to court documents, Miller told police he lived in Phoenix at the time of the murders, and that he rode his bike along the paths where Brosso and Bernas were found.

He could not explain the alleged match between the DNA found on their bodies and his own.

He said he was not the killer.

Voucher program to spend more than $300M this school year How many Latinos voted in Arizona's midterm elections? 5 takeaways as Booker cooks Kings for 44 points in Suns' win Kenny Dillingham too young for Arizona State job? So what

Seven and a half years after his arrest, Miller is set to go to trial.

It will be a bench trial, Miller having waived his right to a jury.

The defense has repeatedly asked for the trial to be delayed, first citing the complexities of investigating a decades-old crime, then the shutdowns and travel difficulties wrought by COVID-19.

Pretrial paperwork flew back and forth. Miller asked the court to dismiss the death penalty for various reasons, including his age at the time of the offenses, and to ban cameras from the courtroom. People were taunting Miller based on his picture, his attorney argued, tossing out insults like "he looks creepy" and "his picture alone gives me the heebie jeebies."

Neither motion succeeded. The justice system slowly ground on.

In July 2021, Miller's attorney, R.J. Parker, asked the court to evaluate if Miller was competent to stand trial, stating he believed his client was unable to meaningfully assist in his defense.

He also indicated, for the first time since Miller was charged, that he was planning to run an insanity defense.

"This is just yet another in a long line of delaying tactics," the state fired back.

Miller was found competent to stand trial, but the state's bid to stop his insanity defense was unsuccessful.

Earlier this year, Marlene Bernas and Angela's mother, Linda Brosso Strock, asked the court to adhere to deadlines. They had a constitutional right to a speedy trial as victims of crime, they said.

They had waited 20 years for someone to be charged in the deaths of their daughters, the motion read.

Then they were "inserted into the cruel and unforgiving criminal justice system that often overlooks the continued trauma it causes for victims".

On Monday, the man accused of killing their daughters will finally go on trial.